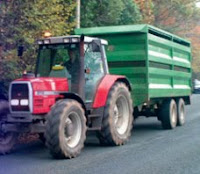 Following letters from 18 senators and Farm Bureau presidents "in a half-dozen states . . . the Federal Motor Carrier Safety Administration has extended its public comment period" on regulations that could further limit the use of farm equipment on public roads, Eliza Newlin Carney of Roll Call reports. (SafeNY photo)

The letters requested "the window for public comment on the proposed safety guidelines be extended by 90 days," Carney reports. Since the consideration of new guidelines was announced May 31, farm lobbies argued that came at the peak of planting season, it left farmers little time to comment.
The proposed regulations could include requiring farmers to obtain commercial driver's licenses. (Read more)
Written by Deloris Foxworth Posted at 7/07/2011 12:20:00 PM