Occupy Main Street? It's happening in some places 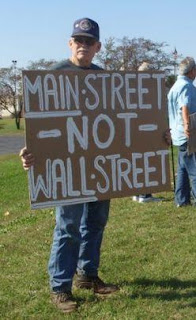 The Occupy Wall Street movement rages on in New York and other major cities, but it has found its way onto Main Streets from Oregon to Alaska to Idaho to Missouri, The Art of the Rural blog reports. (Photo: The Hill N' Holler Review)

The rural demonstrations in Missouri tend to "offer a more coherent and to-the-point articulation of specific demands," the blog says. "Their proposed solutions are local, practical and eminently sensible."  Carroll Lucas of The Hill 'N Holler Review blog said about 25 people held up signs of protest outside the West Plains, Mo., branch of Bank of America because, as protest spokesman Dean Henderson said, the bank is a "symbol of big money." The protesters had a variety of ages and politics.

Rachel Reynolds of The Art of the Rural notes corporate influence affects many issues that directly affect rural people, such as environmental, energy and agricultural policies: "Many of the issues that we as rural Americans face, such as lack of access to broadband and adequate healthcare, can be directly tied to the fact that we are not a profitable investment." She also says rural communities have "the power to impart change" by removing their money from national banks and putting it into local banks and credit unions.

On a busy corner of U.S. 95 in Coeur d'Alene, Idaho, residents demonstrated in a protest organized on Facebook. Jessica Robinson of Oregon Public Broadcasting reported that about 20 people of all ages attended. Diane McEachern, professor at the University of Alaska's Kuskokwim campus is "occupying" Bethel, Alaska, on the edge of the tundra, far from the road system. A photo of her and her dogs with her protest sign that reads "Occupy the Tundra" that she posted on the Occupy Wall Street Facebook page has been circulated more than 4,000 times. She told the Alaska Dispatch that she is holding vigil in the tundra to "voice things that were important to her," like the proposed Pebble Mine for minerals in southwestern Alaska. (Read more)
Written by Ivy Brashear Posted at 10/18/2011 01:10:00 PM