Reflecting national trends, the unemployment rate in rural counties is at its lowest since 2008, with two out of three counties gaining jobs since November 2010, Bill Bishop of the Daily Yonder reports. Through an analysis of federal unemployment data from the Bureau of Labor Statistics, Bishop found rural counties added almost 300,000 jobs in 2011, gaining jobs on pace with the rest of the country. The unemployment rate for rural America is now 8.1 percent. (Yonder map; click for larger version; green counties saw job gains, pink and magenta saw job losses; white counties were stable or are metropolitan) 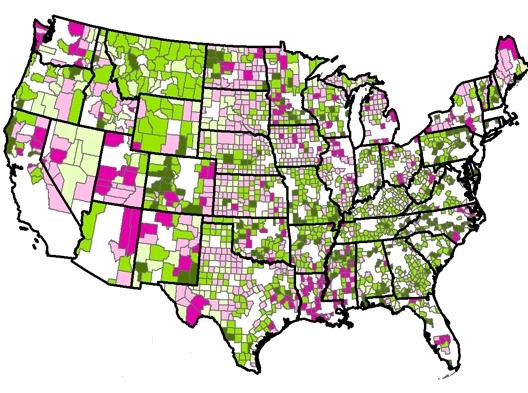 Two rural counties in Mississippi, Warren and Jones, lost the most jobs during the period. Great Plains states, which had the lowest unemployment rate through the recession, lost jobs last year, often in counties with low unemployment rates. Job gains in the Midwest are a reflection of the oil and natural gas drilling boom, Bishop reports. The Southeast gained the most jobs, and data shows counties hit hard by the recession also had job growth last year. California has the highest rural unemployment rate in the country at 12 percent; South Carolina had the second-highest at 11.6 percent. (Read more)
Written by Ivy Brashear Posted at 1/10/2012 12:02:00 PM