Are seat belt laws being strongly enforced by judges in your area? Answer in one Ky. county is 'no' 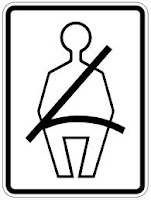 Seat belt laws are almost universal in the U.S., with 49 states having some form of requirement on the books, but seat-belt use hasn't caught on in many rural areas, and one reason might be lax enforcement. In Casey County, Kentucky, District Judge Michael Loy dismissed 97 of 119 seat-belt tickets last year, reports Larry Rowell of The Casey County News. This looks like a good story idea anywhere.

The judge told Rowell a verbal warning to a first-time offender "is enough," arguing that it "carries the same weight" as a fine. Judges in adjoining counties don't share Loy's philosophy, Rowell reports. The highest rate of seat-belt ticket dismissals in those counties was only 22 percent, compared to 82 percent in Casey County, a very rural, hilly, non-coal Appalachian county in south-central Kentucky.

Law enforcement officers are concerned that the Casey rate is so high, especially since in 49 percent of Kentucky's 720 traffic deaths last year, the deceased weren't wearing seat belts. "Wearing a seat belt is the cheapest life insurance you can have," said Trooper William Gregory, the regional Kentucky State Police spokesman. "The numbers indicate that a failure to write a citation and then not have the courts enforce the citation enables the public to drive without fear of consequences which leads to a number of automobile fatalities." (Read more)

Seat belt use in rural areas has been historically low, even though data has shown rural roads are more dangerous than in other parts of the U.S. A 2010 Centers for Disease Control study found that 68.3 percent of people in rural counties reported wearing seat belts, compared to 87.4 percent in metropolitan areas.
Written by Ivy Brashear Posted at 2/15/2012 02:20:00 PM

I'm of 2 minds about seatbelt enforcement. I did not start wearing a seat belt as a habit until I came across a friend walking along the highway with a look of desperation in his face. I stopped and enquired. He said with tears in his eyes and a choked up voice, "I think I killed him. I pulled out in front of him and side swiped him. He lost control and was thrown from the truck. His little son was with him but he's ok, but I think he's dead." Right away I figured the unfortunate chap who lost his life did not have his belt on. I've tried to wear one ever since that day back in 1983. But sometimes I forget momentarily. And, if a police car is behind me I begin to resent that I may get a ticket because I forgot to buckle up. Now, I have a car that will not let me forget. It drives me crazy if I don't. But my wife's car is different and I drive it some too. Absent-minded and alive in Athens, Ohio.