Wendell Berry, in national lecture, calls for affection to community to counter pillage by 'industrialism' 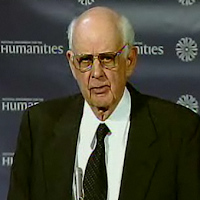 Wendell Berry is a farmer, author, essayist and poet, and seems comfortable with those labels, but not so much with "philosopher." In last night's Jefferson Lecture in the Humanities at the Kennedy Center in Washington, D.C., he sounded very much like a philosopher, yet still grounded firmly in the hills along the Kentucky River in the Outer Bluegrass.

The National Endowment for the Humanities couldn't have picked a better speaker this year, reports Scott Carlson of the Chronicle of Higher Education, because Berry is the perfect person to be an eloquent, yet scathing, critic of the world's current industrial economy after the recent global economic crisis, unrest in society, and deterioration in the world's ecosystems. Berry said in his lecture that industrial society has taken "its toll on humanity."

"The two great aims of industrialism -- replacement of people by technology and concentration of wealth into the hands of a small plutocracy -- seem close to fulfillment," Berry said. "At the same time the failures of industrialism have become too great and too dangerous to deny. Corporate industrialism itself has exposed the falsehood that it ever was inevitable or that it ever has given precedence to the common good."

Berry also spoke of place and community during the lecture, saying that "affection and its power bind people to community." Carlson writes that Berry's speech was "a meditation on place and those who 'stick' to it as caretakers and curators." Berry said "we find the possibility of a neighborly, kind, and conserving economy" in affection. He called the opposite of a "sticker" a "boomer," or someone who comes into a community to profit and then leave. But he said it's not just the boomers who are responsible for the state of our economy: "We all are implicated."

The cure for our diminishing relationship to the land and to community is affection, connection and a broader definition of education, Berry said. He said we should appreciate "economy" for the original meaning of the word: household management, and that education should be broadened to include study and appreciation for practical skills, including land use, life support, healing, housekeeping and homemaking. "I am nominating economy for an equal standing among the arts and humanities," he said. "The making of the human household upon the earth: the arts of adapting kindly the many human households to the earth's many ecosystems and human neighborhoods. This is the economy that the most public and influential economists never talk about, the economy that is the primary vocation and responsibility of every one of us."

UPDATE, April 25: For Brad Bowman's story on the speech in the Henry County Local, Berry's hometown paper, click here. Mark Bittman reports on a visit to Berry's place, on the Opinionator blog of The New York Times:

"There is something about his attachment to nature — it’s not just the land but everything on the land — that is so profound that his observations and his judgments (Wendell is a kind but very judgmental man) can be jaw-dropping. If you read or listen to Wendell and aren’t filled with admiration and respect, it’s hard to believe that you might admire and respect the land or nature, or even humanity. . . . I doubt there is a more quotable man in the United States."

Bittman asked the big questions: “How are we going to change this?” and “What can city people do?”

Berry said change will come from “people at the bottom,” city and country, doing things differently. “[N]o great feat is going to happen to change all this; you’re going to have to humble yourself to be willing to do it one little bit at a time. You can’t make people do this. What you have to do is notice that they’re already doing it. . . . The main thing is to realize that country people can’t invent a better agriculture by ourselves. Industrial agriculture wasn’t invented by us, and we can’t uninvent it. We’ll need some help with that.” (Read more)
Written by Al Cross Posted at 4/24/2012 03:10:00 PM

This was on NPR national