As USPS's cutbacks proceed, 4,100 postmasters, mostly rural, retire -- and get written up

This week the U.S. Postal Service said that, thanks to a $20,000 incentive, nearly 3,800 postmasters had taken early retirement as of July 31, and about 300 will be retiring by the end of September, bringing the total to 4,100. Save The Post Office has compiled dozens of news articles from small newspapers that chronicled the lives and importance of those people on the communities they served. The stories show just how much the postmaster is valued in a small town and how sorry people are to bid farewell. "They provide a glimpse, into a world that’s being stamped out by POStPlan," Save the Post Office says, providing a sweet slide show of some of the departing postmasters and links (including a few that don't work) to the stories. 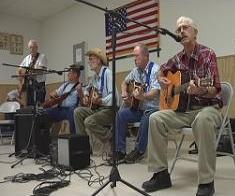 Here's our favorite lede of the stories we were able to read, by John Christensen of the Chronicle-Express in Penn Yan, N.Y.: "Despite the widely held belief by his coworkers that he took his oath of office from Benjamin Franklin himself, and that he would never retire, Penn Yan Postmaster Leigh MacKerchar is about to do just that after a mere 30 years braving the rain hail and sleet, and the heat of the day and dark of night. Known as one of the friendliest faces in public service, he will be sincerely missed by all who have benefited from his commitment to that service and the satisfaction of his postal customers." (Read more) Most of the stories are from newspapers, but here is one from KOLN-TV in Lincoln, Neb., which covered a musical sendoff by the Riverdale Rounders, above, for Riverdale postmaster John Schafer.

In a tribute to them all, Save The Post Office writes, "Nearly 6,000 POStPlan post offices are losing their postmasters — 1,800 to retirement and 3,900 to transfers. These post offices will not be welcoming a new full-time postmaster ever again. Instead, a postmaster relief or a clerk will be filling in until the Postal Service conducts a survey and holds a community meeting and decides the fate of the post office. Those that aren't closed will have their hours reduced, and the postmaster position will be filled by a part-time worker. All the retirements and transfers have to be causing confusion and consternation for customers and postal workers. The average length of service for the 50 retiring postmasters in those news articles was 32 years. Those 4,100 retirements thus represent over 130,000 years of experience. That’s a lot of institutional knowledge to disappear overnight." (Read more)
Written by Amy Wilson Posted at 8/10/2012 04:53:00 PM