Most of big electric co-op's board quits, amid threat to CEO's job and strong community reaction 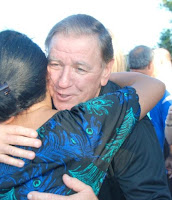 In a highly unusual move, most directors of Kentucky's largest rural electric cooperative have resigned after friction between board members and the co-op manager generated a public controversy.

Four of the seven directors of the South Kentucky Rural Electric Cooperative Corp. quit at the close of yesterday's board meeting. Last month, rumors that veteran CEO Allen Anderson would be terminated caused some in the Somerset area to rise up in protest. Anderson confirmed to The Commonwealth Journal's Jeff Neal last month that the rumors were based in fact. (CJ photo: Anderson hugs co-op member)

Anderson told Neal last month that he raised the issue of his employment with the board. "If they're actively trying to replace me, I think after 34 years I deserved for them to talk directly to me," he told Neal. "I think we all understand now that the [co-op] members will be watching and taking stock of what's happening." He said there had been a "rift" between him and some board members when the co-op's 50,000 member-customers didn't re-elect some incumbents. Some co-op employees were reportedly involved in the insurgents' campaigns, something that Anderson said he discouraged.

Yesterday, Board Chairman Richard "Rick" Stephens, left, board members John Pruitt Jr., William Shearer and Charles Gore resigned, along with board attorney Darrell Saunders. Stephens, who was on the board for 36 years, chairing it for the last 12, had been the target of a campaign to remove him from the board, reports Ken Shmidheiser of The Commonwealth Journal. The campaign was led by three local businessmen, who launched a website, Save SKRECC, that listed allegations against Stephens, including sweetheart land deals and possible conflicts of interest.

The co-op paid "just over $1 million, almost double what a company called Speculative Ventures had paid for the land just months earlier," for an 84-acre site for its new headquarters in 2003, reports Bill Estep of the Lexington Herald-Leader. "The Kentucky Public Service Commission denied South Kentucky's request to build an $18 million office at the site in 2009, saying the price was too high."

Stephens defended himself by saying everything was voted on by the entire board and supported by the management. "I am just one of seven individuals on the board, and do not have the authority to act alone," he wrote in The McCreary County Voice, a weekly newspaper that is owned by his family and competes with the McCreary County Record, which like The Commonwealth Journal is owned by Community Newspaper Holdings. (Read more)
Written by Ivy Brashear Posted at 9/14/2012 12:00:00 PM