Drought has produced mixed pumpkin harvest; fewer, but some that made it are big and pretty 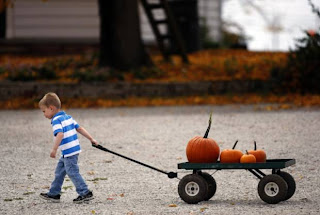 This year’s devastating drought has reduced the number of pumpkins in many Ohio patches, but some say the summer’s abundant heat and sunshine has also produced some particularly big and rather good looking specimens. Mary Vanac of The Columbus Dispatch reports the good news that pumpkins actually like it hot. “Overall, there should be a good-size, quality harvest,” said Lisa Schacht, co-owner of Schacht Family Farm and Market in Canal Winchester and president of the Ohio Produce Growers and Marketers Association. (Columbus Dispatch photo by Jonathan Quilter)

Those who are wondering about how Thanksgiving dinner is going to be affected may have to wait a little longer, however. Roz O'Hearn, spokeswoman for Nestle USA, maker of the famous Libby-brand pumpkin that makes the famous Libby pumpkin pie, said it was too early to tell if the supply or price of canned pumpkin is at risk. “Our harvest is under way now,” O’Hearn told Vanac. “The many thousands of acres of pumpkin we grow are located right in the midst of the drought-stricken area, 50 miles out in any direction from Morton, Ill., where we pack the pumpkins we pick.” Libby’s did not irrigate its pumpkin fields, she said, so yields will be down this year. Ohio's pumpkin crop represented more than 10 percent of the U.S. pumpkin crop last year.
Written by Amy Wilson Posted at 10/05/2012 12:19:00 PM