U.S., U.K., China, Arabs among buyers of farmland in other countries, mostly in Africa, Asia

In response to increasing world population and food prices, and shrinking supplies of fresh water, a number of countries and investors are buying up foreign farmland "in an apparent attempt to acquire as much precious soil and water as possible," Brad Plumer of The Washington Post reports. It's been called "land grabbing," and it's been accelerating since grain prices increased in 2007. Between 0.7 and 1.75 percent of the world's agricultural land is being transferred to foreign investors from local landholders, according to a major new study published this week in Proceedings of the National Academies of Sciences. (Map from the study shows locations of buyers and sellers; click on it for a larger version) 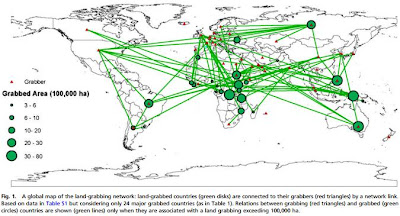 The total area of agricultural land being transferred is larger than France and Germany combined, Plumer writes. Big buyers include the U.S., the U.K., China, the United Arab Emirates, South Korea, South Africa, Israel, India and Egypt. They mostly buy land in Africa and Asia, particularly in less-developed nations. The study, "Global Land and Water Grabbing," shows that investors typically buy land with plenty of fresh water. After it's bought, the land is turned over to large commercial farming. About 37 percent of the land is used to grow food, 21 percent is used to for other cash crops, and 21 percent is used to grow biofuels, according to a 2010 World Bank study. (Read more)
Written by Ivy Brashear Posted at 1/29/2013 01:58:00 PM