Big story on N.D. oil boom has lesson for reporters 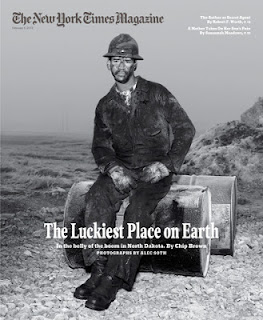 "It’s hard to think of what oil hasn’t done to life in the small communities of western North Dakota, good and bad," Chip Brown writes in The New York Times Magazine. "It has minted millionaires, paid off mortgages, created businesses; it has raised rents, stressed roads, vexed planners and overwhelmed schools; it has polluted streams, spoiled fields and boosted crime." (NYT photo by Alec Soth, Magnum)

Brown's long story is a broad, deep look at what happens to a rural area where the economy was based on production agriculture but is now based on energy production. He starts with a look back at a glimpse of the boom's harbingers, the geologists and leasing agents "whose job was to dig through courthouse books for the often-tangled history of mineral title and surface rights. . . . Because the courthouse didn’t open until 7:30, the landmen would leave their briefcases outside the entrance, on the steps, in the order they arrived." (Read more)

The lesson of this story for journalists is to be alert for harbingers. When it comes to oil and natural gas, too many landowners have signed up for a poor deal because they didn't know how much demand there was for their mineral rights. Their news media should be telling them.
Written by Al Cross Posted at 2/04/2013 03:38:00 PM