After major population increases in non-metro counties in the 1980s and 1990s, and a moderate increase in the first half of the last decade, the number of people living in non-metropolitan counties declined last year for the first time since the Census Bureau started estimating county populations, reports the Economic Research Service of the Department of Agriculture.

ERS analyzed the census estimates and found that from July 2011 to July 2012 population in non-metro counties fell 0.2 percent, meaning more people died or moved away than were born in or migrated to those counties. From April 2010 to July 2012, the decline was 0.1 percent. The Daily Yonder notes that the Census Bureau started estimating county populations in the 1960s.

While ERS geographer John Cromartie writes that this is "a historic shift," It should be noted that non-metro counties do not contain all the rural population, much of which lives in rural census tracts of counties that have been placed within metro areas because more than a fourth of their workforce commutes to the area's core counties. Such counties tend to be gaining population, not losing it.

"Historically, non-metro population grew because natural increase (more births than deaths) always offset net migration loss (more people moving out than moving in),"  Cromartie writes on the agency's Amber Waves. "But falling birth rates and an aging population have steadily dampened the natural increase in non-metro population over time." Migration rates peaked in 2006, right before the housing mortgage crisis. (Read more) Here's a county map of rural population trends; click on it for a larger image. 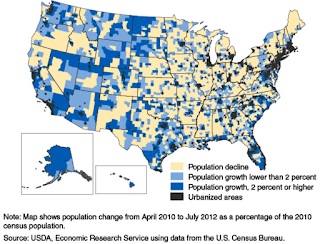