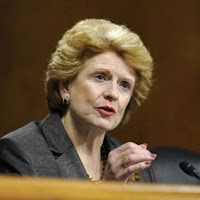 The final path to a new farm law was set today, as Democratic Sen. Debbie Stabenow, left, and Republican allies on her Senate Agriculture Committee persuaded GOP budget hawks to agree to her parliamentary maneuver to set up a Farm Bill conference with the House.

"In a single stroke, the Stabenow motion served to call up and amend the House farm bill—approved last week—with the Senate’s fuller version that includes a nutrition title funding food stamps and local food banks around the country," David Rogers reports for Politico. "This is important because the House Republican leadership had jettisoned the same nutrition title last week to win back the votes of conservatives for the farm bill. By doing what she did, Stabenow establishes the nutrition programs as a qualified subject for the House and Senate conference."

Rogers adds, "Mindful of this, Republicans in the House are expected to slow walk the process of appointing conferees to give them more time to reach agreement on how to approach the food stamp issue. . . . "It’s very likely that no formal conference will begin before the August recess." However, Stabenow suggested that most of the negotiations would be informal, and those talks have already begun. (Read more)
Written by Al Cross Posted at 7/18/2013 10:21:00 PM