How partisan are your state legislators? How effective are they at attracting co-sponsors for their bills and passing them into law? If you live in one of the 35 states analyzed in new interactive charts by the Sunlight Foundation, you can get at least something of an idea. The charts are "a pretty good visualization of the increasing partisanship in state capitals," Niraj Chokshi of The Washington Post writes on the paper's GovBeat blog. Here's a screen grab of the Illinois House chart: 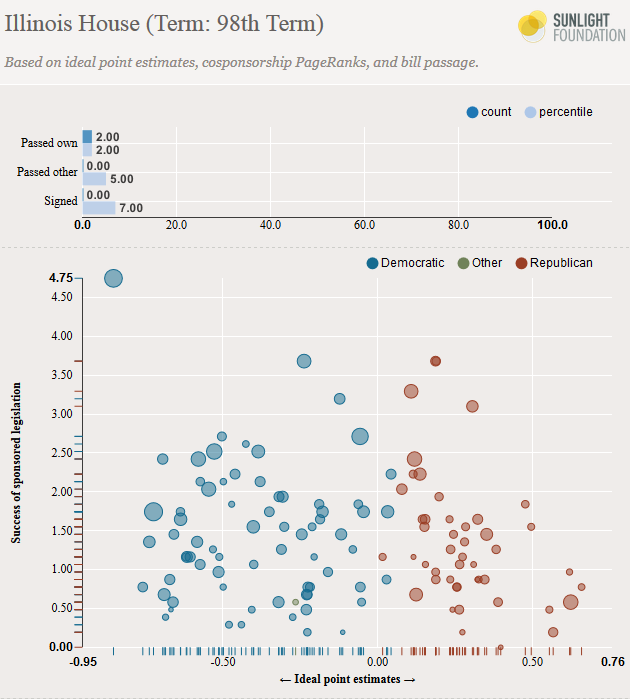 Each legislator is represented by a circle, and is plotted along a liberal-conservative spectrum from left to right. The vertical axis shows each legislator’s success at passing bills. To minimize the influence of what developer Thom Neale calls “theatrical bills” — the kind with little substance that serve as political messaging — he "assigned greater weight to bills that were subsequently signed by the governor into law," Chokshi reports. "The measure isn’t foolproof. Some state legislative staffers pushed back on his weighting system, and measuring impact is difficult. But, again, it shows relative effectiveness rates for each legislator." The size of each circle reflects how often colleagues so-sponsor a legislator's bills." In the interactive version, hover any circle for more information about each legislator.
Written by Al Cross Posted at 6/14/2014 12:27:00 PM