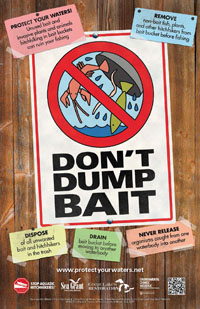 Invasive species, such as Asian carp, have been threatening Lake Michigan and the other Great Lakes, creating fear that the region's $7 billion annual fishing industry could be at risk. Adding to the problem is that anglers are unknowingly aiding the growth of invasive species by dumping unused bait with invasive species DNA into the waters, says a report by researchers at Central Michigan University and the University of Notre Dame published in Conservation Genetics Resources. (Illinois-Indiana Sea Grant graphic)

Researchers "tested water samples from tanks containing small fish for sale as bait at more than 500 shops around the eight-state region," reports the Great Lakes Echo, a service of the Center for Environmental Journalism at Michigan State University. Results found that 27 of the samples tested positive for DNA of invasive fish, such as Asian carp. The reports "says more consistent bait fish regulation among Michigan and other Great Lakes states is needed." (Read more)
Written by Tim Mandell Posted at 9/10/2014 01:46:00 PM