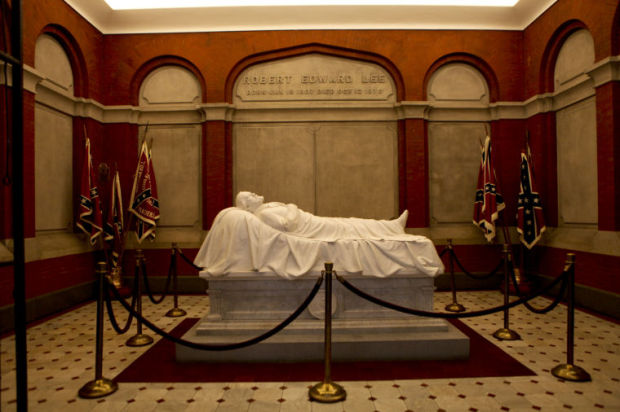 A college named after Robert E. Lee has removed Confederate flags from its campus after law students "complained because they had to pledge an honor code in the presence of the flags, something they said glorified Lee’s actions," Carmen Forman reports for The Roanoke Times. Kenneth Ruscio, president of Washington and Lee University in Lexington, Va., said Wednesday in his convocation speech that all flags had been removed as "a way of building a community of diverse views and respect on campus." Lee was president of the school when it was named Washington College. The school was renamed after Lee's death. (Times photo by Stephanie Klein-Davis: Confederate flags on campus)

Ruscio said he had support from the Lee family, citing a letter he received from Lee's great grandson Robert E. Lee IV, which said: “It is clear to me that president Lee would wholeheartedly support your goals of making Washington and Lee a welcoming environment for all students who choose to come there today. As a proud alumnus, I, too, support those goals. In my view, removing the flags from the statuary chamber is overdue. I am proud of my alma mater. I am certain that my great-grandfather would be proud of the institution he once led.”

While retaining the flags had received little support on campus, the same can't be said of residents of the town of 7,000, Forman writes. Brandon Dorsey, commander of Camp 1296 of the Lexington-based Stonewall Brigade of the Sons of Confederate Veterans, "said it doesn’t matter that a distant relative of Robert E. Lee supported taking down the flags because it wasn’t right in the first place. To him, Lee deserves to have flags of the nation he fought for hang in a building memorializing him."

Dorsey told Forman, “It’s disrespectful. There wouldn’t be a Washington and Lee University if there hadn’t been a Robert E. Lee. He deserves to have that recognition remain there. Just because you have a family member that takes a position doesn’t mean that has any reflection on the father or grandfather’s views. It’s neat that he’s a descendant, but he didn’t know Robert E. Lee.” (Read more)
Written by Tim Mandell Posted at 9/11/2014 03:56:00 PM