Most wind-power capacity is in GOP districts, but many Republicans oppose extending its tax credit 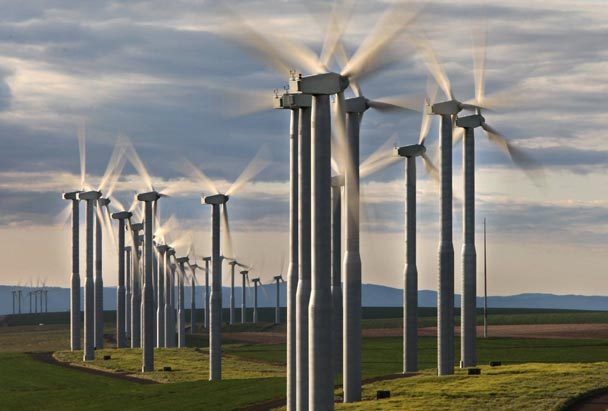 In many states, heated battles are brewing over wind turbines, which have been welcomed by some "as an economic boon to landowners who receive lucrative payments for leasing acreage" but are opposed by others who say they are noisy, detrimental to the health of residents living in the vicinity and dangerous to birds and bats, Hal Bernton and Erin Heffernan report for The Seattle Times. (Times photo by Steve Ringman: Wind farm in Wallula, Wash.)

A tax credit for wind power "was first passed by Congress in 1992 and has been periodically extended. It is currently set at 2.4 cents per kilowatt hour, and, during times of glutted electricity markets, can actually be worth more than the wholesale price of power," the Times reports. "This tax credit has helped catapult wind power to the front of the U.S. efforts to launch a renewable-energy industry. By the end of 2012, wind power represented 43 percent of all new U.S. electric generation installed that year and was hailed by the Obama administration as a key in the global effort to combat climate change."

But "critics have attacked wind power as a fickle source of electricity that ebbs whenever the wind dies down," the Times notes. "They fault the tax credit for encouraging new projects to come on line at a time when many utilities have plenty of power."

"Most of the wind-power capacity is within Republican congressional districts, but many politicians in the party have made ending the tax credit part of their agenda," the Times reports. "This year, efforts to extend the tax credit have made little headway in the Republican-controlled House of Representatives. The fight against the tax credit also has been championed by Americans For Prosperity. One of the nation’s most prominent conservative advocacy groups, it was co-founded by billionaire David Koch, who has extensive interests in the fossil-fuels industry." (Read more)
Written by Tim Mandell Posted at 9/09/2014 11:36:00 AM