U.S. is importing more beef than it exports; USDA only highlighting the positive side of trade

The U.S. Department of Agriculture is only highlighting the positives of trade in beef, obscuring the fact that the nation is importing more beef than it exports, Harwood D. Schaffer and Daryll E. Ray of the University of Tennessee write in their latest "Policy Pennings" column. The April issue of Livestock and Poultry: World Markets and Trade (L&P), produced by the Foreign Agricultural Service and USDA, says "Trade of All Meats to Expand in 2016." For beef and veal it says "Exports by major traders are forecast 1 percent higher to 9.6 million tons as growth to Asia offsets soft demand in other regions" and U.S. "exports are expected to grow 8 percent as production expansion and declining U.S. beef prices spur demand. Lower Australian supplies will enable the U.S. to regain some market share in Asian markets. However, exports will remain below the 5-year average as the strong dollar continues to hamper shipments, especially to Canada and Mexico." 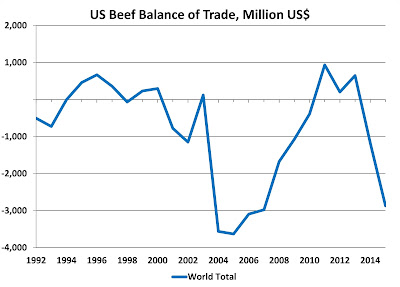 "If the decline in price is greater than the 8 percent that beef and veal exports are expected to grow, we could be selling more and still see total revenue fall," Schaffer and Ray write. “We understand that the USDA may want to put a positive spin on an otherwise difficult picture for U.S. cattle producers, but we believe that in doing so the department does farmers and ranchers a disservice with analysis like that found in the April 2016 L&M. It is particularly problematic when we hear people following the lead of the USDA in promoting the Trans Pacific Partnership trade agreement by predicting an increase beef exports but not discussing its impact on U.S. imports.”

"When government publications talk about trade, as referenced in the title of L&P, they should be expected to discuss both sides of the trade equation, even when the numbers may not be to the liking of US producers," Schaffer and Ray write. "To make informed policy evaluations, policy makers and producers alike need full information." (Read more)
Written by Tim Mandell Posted at 5/24/2016 11:00:00 AM