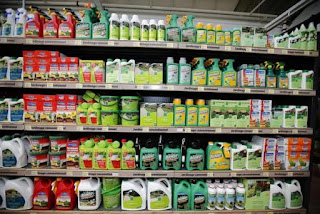 European Union nations on Monday refused to back a limited extension of the herbicide glyphosate, "threatening withdrawal of Monsanto's Roundup and other weed-killers from shelves if no decision is reached by the end of the month," Alissa de Carbonnel reports for Reuters. "Contradictory findings on carcinogenic risks have thrust the chemical into the center of a dispute among EU and U.S. politicians, regulators and researchers. Citizen and environmental groups have urged governments to exercise caution." (Reuters photo by Charles Platiau)

"EU executive had offered a 12- to 18-month extension to allow time for further scientific study by the European Chemicals Agency in hopes of allaying health concerns," de Carbonnel writes. "Its earlier proposal to renew the glyphosate license for up to 15 years had failed to win support in two meetings this year."

On Monday Monsanto "defended the safety of its widely used herbicide, and said glyphosate's license should be renewed for the full 15 years" de Carbonnel writes. "Monsanto has not ruled out a legal appeal if approval lapses after June 30, requiring a six-month phase-out of glyphosate-containing products. The industry lobby has criticized the regulatory uncertainty. The controversy hangs over German chemicals group Bayer's $62 billion offer in May to buy" Monsanto. (Read more)
Written by Tim Mandell Posted at 6/07/2016 09:37:00 AM