Ag groups not happy with Trump's decision to pull U.S. out of Trans-Pacific Partnership 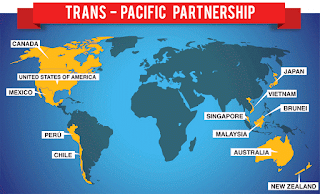 President Trump's decision to pull the U.S. out of the Trans-Pacific Partnership is not sitting well with some agricultural groups, Bill Tomson reports for Agri-Pulse. TPP is "a 12-nation trade pact that the Obama administration spent years orchestrating in order to give the U.S. a new leadership role among Pacific Rim countries."  Many of the other nations—Japan, Mexico, Canada, Australia, Vietnam, Brunei, Chile, New Zealand, Peru, Singapore and Malaysia—will likely join a competing 16-member trade deal with China called the Regional Comprehensive Economic Partnership.

Brad Haire, of Western Farm Press, writes, "TPP represents 40 percent of the world's gross domestic product, and according to the Peterson Institute, would have increased overall U.S. exports by $357 billion by 2030. Additionally, TPP was the first regional trade agreement to address the need to coordinate international policy on trade in the products of agricultural biotechnology, a benefit the ASA says it will push to see in any future agreements with TPP partner nations."

Trump called the move "a great thing for the American worker," Chris Clayton reports for DTN The Progressive Farmer. White House spokesman Sean Spicer told reporters "that TPP basically put the U.S. 'on par' with several smaller countries that got great access to the U.S. without great benefit to U.S. companies." Spicer said, "That's not putting the U.S. interests first." He said "the president's trade team would immediately start negotiating bilateral trade deals that would give the U.S. more leverage and flexibility."

American Soybean Association President Ron Moore said in a statement: "Trade is something soybean farmers take very seriously. We export more than half the soy we grow here in the United States, and still more in the form of meat and other products that are produced with our meal and oil. The TPP held great promise for us, and has been a key priority for several years now. We're very disappointed to see the withdrawal today."

American Farm Bureau Federation President Zippy Duvall said in a statement: "We viewed TPP as a positive agreement for agriculture—one that would have added $4.4 billion annually to our struggling agriculture economy. With this decision, it is critical that the new administration begin work immediately to do all it can to develop new markets for U.S. agricultural goods and to protect and advance U.S. agricultural interests in the critical Asia-Pacific region.”
Written by Tim Mandell Posted at 1/24/2017 12:10:00 PM