U.S. dams are getting older and creating hazardous conditions like the near disaster in Oroville, Calif., that led to the evacuation of 180,000 people, Troy Griggs, Gregor Aisch and Sarah Almukhtar report for The New York Times. The Association of State Dam Safety Officials in 2015 listed nearly 2,000 state-regulated high-hazard dams in the U.S. as being in need of repair. The American Society of Civil Engineers says that by 2020, 70 percent of U.S. dams will be more than 50 years old. (Times map: Age of major U.S. dams) 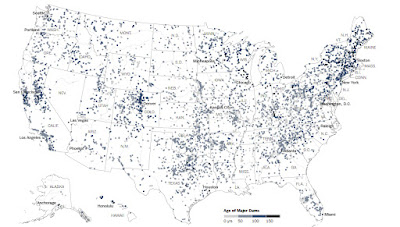 In 2016, the Association of State Dam Safety Officials "estimated that it would cost $60 billion to rehabilitate all the dams that needed to be brought up to safe condition, with nearly $20 billion of that sum going toward repair of dams with a high potential for hazard," reports the Times.

The U.S. Army Corps of Engineers says more than 8,000 of the 90,000 dams in its inventory are classified as major dams by height or storage capacity, according to guidelines established by the United States Geological Survey, reports the Times.

While the Oroville dam drew national attention, there was another disaster two weeks ago in Nevada when heavy rains caused the Twentyone Mile Dam to burst, "resulting in flooding, damaged property and closed roads throughout the region," reports the Times. The Corps says "The earthen dam, built in the early 1900s and less than 50 feet tall, is one of more than 60,000 'low hazard' dams. Typically, failure of a low hazard dam would cause property damage, but it would most likely not kill anyone."
Written by Tim Mandell Posted at 2/24/2017 11:46:00 AM