Katherine Cramer, who chronicled rural Wisconsin voters' sense of resentment in her 2015 book The Politics of Resentment, said Monday at the University of Minnesota that one of the main reasons rural areas carried Donald Trump to a surprise victory in the 2016 presidential election is resentment "that a small slice of wealthy and well-connected Americans are best able to get the government to attend to their wants and needs," Eric Black writes for MinnPost.

She said "the poor and powerless in both the rural and urban areas are grossly neglected by comparison," Black writes. "But the rural voters she studied are convinced that the maldistribution of government attention and aid favors the urban areas in general as against the rural areas in general. The rural people she talked to feel they are losing ground. They feel that whoever is in charge doesn’t know them or respect them or care about their challenges."

"Cramer’s conversation in rural Wisconsin also led her to reject the idea that these rural Republicans are voting primarily on social issues, like gay rights or abortion," Black writes. "In her conversations with them, the rural folks were always emphasizing economic issues, like jobs and infrastructure." (Times graphic: Change in unemployment since the end of the recession) 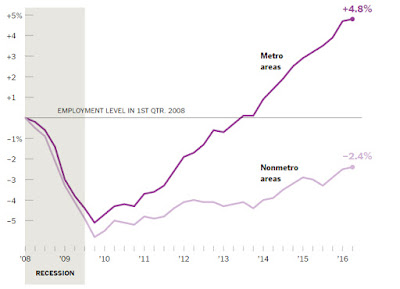 Thomas B. Edsall, in his weekly column for The New York Times, argues this week that another reason for rural resentment is that urban areas recovered from the recession at a much greater rate than rural areas. He writes, "The fact that people living outside big cities were battered so acutely by the recession goes a long way toward explaining President Trump’s victory in the last election."

While many urban areas recovered jobs lost in the recession, Edsall says several rural areas with continued high unemployment rates that supported Obama in 2008 and 2012 switched to Trump in 2016. He writes, "From another vantage point, Trump did best in regions where economic growth was the worst—where jobs are disappearing and where middle-aged white men and women are dying at younger ages."
Written by Tim Mandell Posted at 4/13/2017 12:15:00 PM