Ray Starling, special assistant to President Trump on agriculture, trade and food assistance, told reporters Monday that the White House's new Task Force on Agriculture and Rural Prosperity would focus on agriculture because it's "the No. 1 driver in these rural communities." However, data from the U.S. Bureau of Economic Analysis show agriculture is not the top job in rural areas, Tim Marema and Bill Bishop report for the Daily Yonder. The agency, which ranks seven rural economic sectors, says agriculture is fifth in earnings and sixth in jobs. (Yonder graphic: Dominant economic sectors in each rural county) 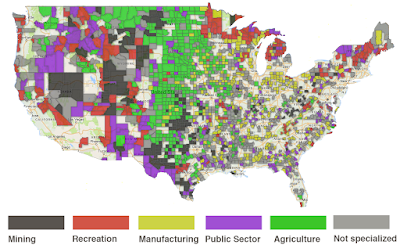 "Like the rest of America, the lion’s share of earnings and jobs for rural Americans comes in service sectors such as health care and retail; business services such as insurance and leasing; the public sector; and manufacturing," the Yonder reports. Agriculture accounted for 11 percent of rural earnings in 2014. That's because the counties that depend on it "as their primary economic engine are also less populous than other types of non-metropolitan counties." About 2.8 million people, only six percent of the U.S. rural population, live in farm-dependent counties.

Trump said "the task force’s work would be identifying regulations that impede agricultural productivity," writes the Yonder. "Included in the executive order is elimination of the Obama administration’s White House Rural Council. That body, started in 2011, was created to foster cooperation among federal agencies to promote 'economic prosperity and quality of life in our rural communities,' according to the executive order that established the council. One charge of the new task force will be to determine whether there is need for a structure similar to the Rural Council in the Trump White House. If so, that body might also work across departments and agencies but would focus on agriculture," Starling said.
Written by Tim Mandell Posted at 4/26/2017 12:57:00 PM