The Children's Health Insurance Program pre-dated the Patient Protection and Affordable Care Act by more than a decade, but the ACA boosted it and made it part of the overall plan for coverage of populations that had difficulty getting it. Now Senate negotiators have come up with a five-year plan that would cut federal contributions to the program in half in 2020 and eliminate them in 2021, leaving states to fend for themselves.

The House has yet to come up with its approach to the issue. Without reauthorization by Sept. 30, some states would have to start winding down the program. Here's a map from the Kaiser Family Foundation, which has more background on the program here. 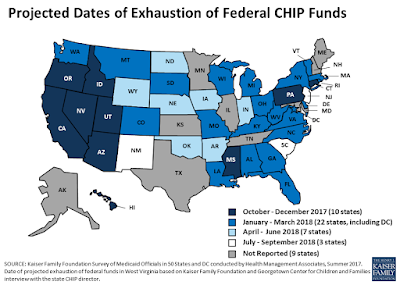