HIV/AIDS advocacy group amfAR offers three maps that illustrate some reasons for the worsening opioid epidemic. They show three things: the number of substance-abuse treatment facilities in each county, which facilities provide at least one medication for opioid addiction, and which provide all three kinds of available medications for opioid addiction, German Lopez reports for Vox.
The first map makes clear that there are a lot of coverage gaps, especially in rural America. It likely understates the level of addiction treatment available in some areas, since doctors can prescribe medication-assisted treatment (MAT) drugs like buprenorphine through a special waiver in their general practice, and that wouldn't show up on the first map, so they did this one:
The number of MAT facilities is markedly smaller, 41.2 percent of the 12,000-plus facilities, German reports. That's an issue, because MAT is "widely considered by experts to be the gold standard in opioid addiction care," German reports, cutting mortality rates among opioid addicts by half or more. MAT is considered so effective that President Trump's commission on the opioid crisis called for a big expansion of MAT.

The last map shows an even smaller subset of treatment facilities: those that offer all three kinds of MAT. "The individual types of medications don’t work for everyone — nothing in addiction treatment does — so it’s important to provide multiple options," German reports. 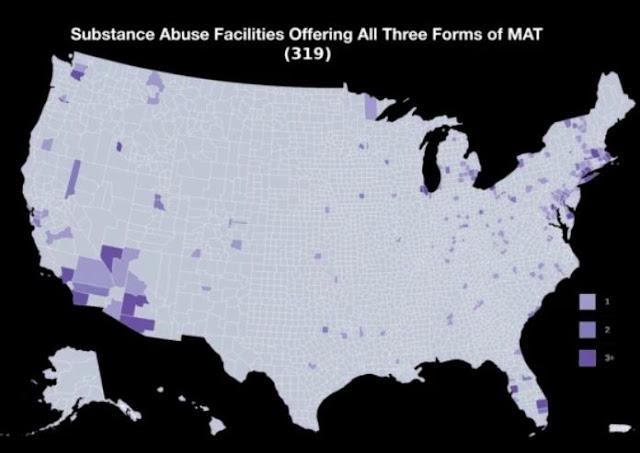 One reason for the lack of substance-abuse treatment facilities is social stigma, but another is federal funding. "In the past few years, for example, the only new federal effort to dedicate a serious amount of money to the opioid crisis was the Cures Act, which committed $1 billion over two years," German reports. But experts say tens of billions of dollars are needed annually to deal with the opioid epidemic.

Stanford University drug-policy expert Keith Humphreys told German, "Crises in a nation of 300 million people don’t go away for $1 billion. This is the biggest public health epidemic of a generation. Maybe it’s going to be worse than AIDS. So we need to go big."
Written by Heather Chapman Posted at 1/18/2018 12:47:00 PM