Trump's tariffs on solar panels could spark a trade war with China, hurting soybean farmers, but look good for coal

President Trump's decision this week to impose tariffs on imported solar panels and washing machines is a "pivotal moment for U.S. trade relationships" and could "open the floodgates" to demands for protectionist tariffs on other products, as well as spark retaliation by trading partners, trade expert Chad Bown writes for The Washington Post. They have potential implications for rural industries such as agriculture and coal.

Trade has long been the issue that most divides Trump from Republicans in Congress. At least six GOP senators condemned his decision, saying further actions could start a trade war that would hurt the U.S. economy and threaten American jobs. "I don't agree with it. I think it's a bad path to head down," Republican Sen. Roy Blunt of Missouri told the Post for another story. "The retaliatory tariff fight is never a good fight, and I generally think we need to be more positive about our trade opportunities." Trump said, "There won't be a trade war."

Most U.S. solar panels come from China, so the tariffs are a "pointed jab" against Beijing, Zeeshan Aleem reports for Vox. Because the move follows months of tough talk from Trump on China, the Chinese may already be taking steps to retaliate with stricter standards on soybeans imported from the U.S., Todd Hultman reports for DTN/The Progressive Farmer. "China has bought nearly every soybean in Brazil to avoid the U.S. before Brazil's next harvest starts shipping out, typically in February. . . . Given the building trade tensions, China's shunning of U.S. soybeans looks a lot like political retribution."

A trade tussle would come at a particularly vulnerable time for American soybean farmers, since robust soybean production for export has made trade increasingly important to their bottom lines. Soybean inventories have doubled since 2015, which can lead to lower prices per bushel, Keith Good reports for Farm Policy News. 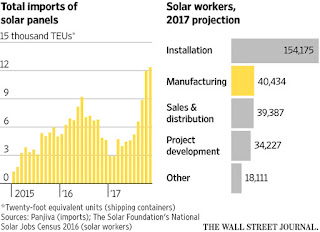 While the tariffs are aimed at helping U.S. solar-panel makers, relatively few of the jobs in the U.S. solar industry are in manufacturing, and the tariffs expire after four years, so there is suspicion that the tariffs are part of Trump's pro-coal agenda. "The collapsing price of solar is the reason for all the new jobs. Increasing the price with tariffs looks like an insidious way to hurt the industry,” writes J. Patrick Coolican of the Minneapolis StarTribune.

"A GTM Research analysis predicts that White House tariffs on solar cell and module imports will cut U.S. solar installations by 11 percent over the next five years, compared to growth that would occur absent the penalties," Ben Geman reports for Axios. Most of the impact would be on the electric-power industry, which relies mainly on coal and natural gas.
Written by Heather Chapman Posted at 1/25/2018 12:21:00 PM