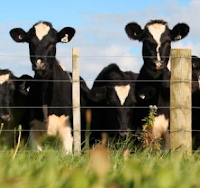 In a victory for the Environmental Protection Agency, a federal appeals court ruled that the agency has until May 1 to begin requiring livestock farmers to report animal-waste emissions. The mandate was scheduled to take effect Jan. 22, but the EPA filed a motion on Jan. 19 arguing that farmers weren't ready to meet its requirements.

"The delay follows a court decision in April that the EPA must force farms to report air pollution for animal waste emissions. The decision invalidated a previous policy under then-President George W. Bush that exempted most farms from such reporting requirements," Miranda Green reports for The Hill. Most facilities are required to report emissions to federal, state and local authorities, "but the EPA, under Bush, decided that it could not do anything to reduce or mitigate emissions from animal waste and that requiring reporting would not be useful."

Measuring emissions can be tricky, especially for large-scale feedlots. The EPA promised to start keeping tabs on feedlot emissions 11 years ago, but hasn't been able to do so effectively because it hasn't settled on a consistent method of measuring data. It's difficult to get meaningful data if feedlots aren't measuring their emissions the same way.
Written by Heather Chapman Posted at 2/06/2018 11:06:00 AM