In a rural Georgia community in the southern Appalachian mountains, private landowners along Betty's Creek are pitching in to restore the stream and the at-risk salamander that calls it home, Dan Chapman reports for the U.S. Fish and Wildlife Service. The FWS is considering adding the hellbender to its threatened or endangered species list later this year, which landowners would like to avoid since such an action would tighten rules about how they can use their land, increasing costs.

One of those landowners is Rabun Gap-Nacoochee School, one of the largest college-prep boarding schools in the South. It's more famous for spearheading the 1960s Foxfire project to preserve Appalachian culture, but the hellbender preservation efforts are closer to home. Betty's Creek is an important part of science education for the students: "Students from sixth grade through high school monitor the hellbender’s habitat, test water quality, analyze the food chain and restore streambanks," Chapman reports. "Their labor of love is also reflected in their grades and presented to the public in an end-of-year science fair. They, as much as adjoining farmers, have a significant stake in the hellbender’s health."

The slime-covered "homely hellbender" is the largest amphibian in the U.S. and can reach two feet in length. Its habitat once stretched from upstate New York to northern Georgia, but sightings are rare these days. Betty's Creek and others in northeast Georgia, western North Carolina and East Tennessee are also promising habitats for the hellbender. It needs cold, clear, moving water and big rocks to burrow under, but fertilizer and chemical run-off from farms, and dirt from construction and road sites have muddied up Betty's Creek, filling crevices hellbenders like to hide and breed in, Chapman reports.

The school is doing its part to keep the creek clean: it only allows its cows to cross the stream at one spot, keeping them from kicking up mud, and now gets its drinking water source from the county system instead of a tributary of the creek, adding 200,000 gallons of water to the daily flow.

Seventh grader Claren Spivey told Chapman: "As a school, and a community, we are a very important part of the watershed and we want to keep it safe because it impacts so many other things in society and nature. . . . As private citizens we should really try to preserve what we have instead of ruining it." (Google map) 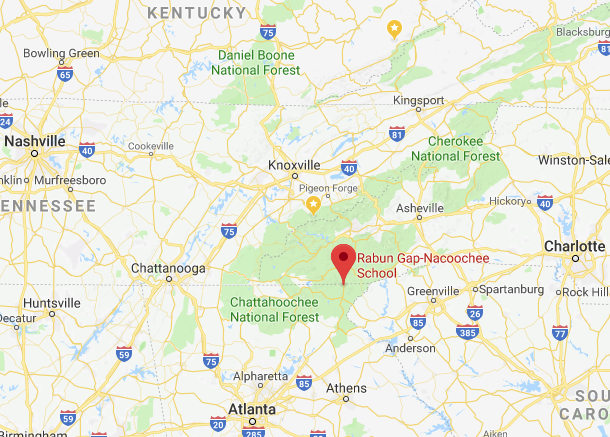