New rules on the herbicide dicamba have fallen short. "University weed scientists estimate at least 1.2 percent of U.S. soybean plantings have been damaged accidentally by the weedkiller," Chuck Abbott reports for Agriculture.com. "Damage was highest in Illinois, the No. 1 soybean-growing state, where 500,000 acres of the U.S. total of 1.1 million damaged acres are located. Arkansas was second with 300,000 damaged acres. By comparison, an estimated 2.5 million acres of soy damage were reported at this point in 2017." Several states enacted regulations limiting use of dicamba to certified applicators and banning it after certain dates and above certain wind speeds. 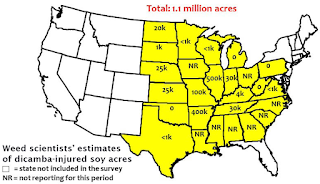 Dr. Kevin Bradley of the University of Missouri issued an estimate based on cases under investigation by state agriculture agencies and estimates from university weed scientists. "Hopefully everyone on all sides of this issue can appreciate that much more happens than what actually gets turned into the state Departments of Agriculture; that is the reason for the map of estimates," he writes.

The central issue with dicamba, made by Monsanto Co., appears to be that it is too volatile: it turns into a powder and drifts onto crops that have not been genetically modified to be resistant to it. Last year, when scientists tested a new "low-volatility" version of dicamba, they found that damage to nearby crops came from such powwder, not windblown droplets from spraying,

Bradley writes, "Can you look at the scale and the magnitude of the problem on these maps and really believe that all of this can collectively be explained by some combination of physical drift, sprayer error, failure to follow guidelines, temperature inversions, generic dicamba usage, contaminated herbicides, and improper sprayer clean out, but that volatility is not also a factor?"
Written by Al Cross Posted at 7/23/2018 11:47:00 AM