The Golden Dozen, the winners of the International Society of Weekly Newspaper Editors' editorial contest, are always a marvelous collection of advocacy and public service. This year's top winner, for work published in 2017, earned ISWNE's Golden Quill award with an editorial that made readers think about a new Iowa law making secret the records of permits to carry guns.

In his 1,200-word piece, North Scott Press Assistant Editor Mark Ridolfi wrote, "Exercising the regulated right to bear and carry firearms, in my view, seems neither an embarrassment to be covered up, nor a benefit to be automatically pushed into print or online. It simply creates a publicly managed record. And publicly managed records, in my view, should be public. Those wanting secrecy say public gun records can be a road map for thieves. But the state’s new stand-your-ground law pretty much assures a grim end to crooks who use that map."

Ridolfi recounted stories that he had done about the records, including one revealing that one in five residents of the Scott County town of McCausland had a permit to carry a concealed firearm. "Now the public records are inaccessible," he wrote. "No one but law-enforcement professionals can look to determine if permits are being issued in accordance with the statewide standard. No one can discern why individuals have been turned down. No one will know if a thrice-denied applicant gets his or her fourth request granted."

The secrecy raises questions that may never be answered, and Ridolfi ticked off several: "Which teachers hold carry permits? Might they be useful in improving school safety? How many private security guards have been denied carry permit requests because of prior offenses? Who has been wrongly denied a carry permit? Who might have been recklessly granted a permit? Are there Iowa permit holders with undisclosed Illinois offenses that should prohibit their use of guns? Or vice versa? Are women denied more frequently than men? Blacks more than whites? Now, only those managing the permits will know."

Ridolfi concluded by noting that the paper had gotten a database of the permit records shortly before they were made inaccessible, and asked readers in the county just north of Davenport some questions: "How would you like to see that record used? Should it be used? Or should the public’s First Amendment rights necessarily defer to its Second?" He pointed out that the First Amendment not only protects freedom of the press, but the right to petition for redress of grievances: "How does the public discern a grievance without access to public records?" 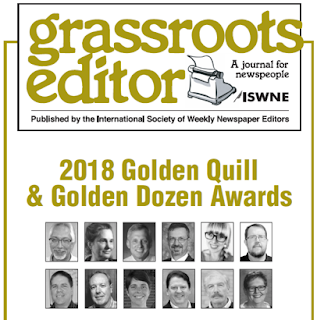 In an editor's note in the latest edition of ISWNE's Grassroots Editor, Ridolfi wrote that "readers bent my ear on the subject. Some acknowledged the value of transparency, even as they flinched about having their own carry permits disclosed. I hope more of my commentary starts discussions, not ends them. I hope it shows our newspaper cognizant not only of press rights prescribed by the First Amendment, but also of press responsibilities, which most readers know little about. . . . We need to remind them over and over that one business in town has their backs. By including details about our reporting activities, we affirm that local news isn’t a collection of thoughts, feelings, philosophies and impressions. It’s about legwork. It’s about triple checking. It’s about afternoons in a courthouse basement plugging through boxes of index cards that reveal who gets guns and who doesn’t. Our news businesses fail when we aim to appeal only to customers who agree with us. We’re unstoppable when supported by readers who respect us."

Others in the latest Golden Dozen are Melissa Hale-Spencer of The Altamont Enterprise in New York; Brian J. Hunhoff of the Yankton County Observer in South Dakota; Mike Buffington of The Jackson Herald in Jefferson, Ga.; Abigail Whitehouse of The Interior Journal in Stanford, Ky.; Brian Wilson of The Star News in Medford, Wis.; Steve Bonspiel of The Eastern Door in Khanawake, Quebec; Donald Dodd of The Salem News in Missouri; Sarah Kessinger of The Marysville Advocate in Kansas; Paul Fletcher of Virginia Lawyers Weekly; William F. Schanen III of the Ozaukee Press in Port Washington, Wis.; and Brenda P. Schimke of the East Central Alberta Review in Coronation.
Written by Al Cross Posted at 7/15/2018 12:28:00 AM