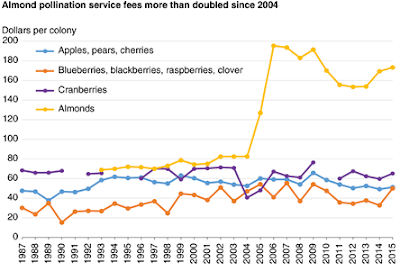 Mostly due to rising demand for almonds, the average beekeeper now makes more money by renting colonies for pollination than through honey sales, Peyton Ferrier reports for Amber Waves, a publication of the U.S. Department of Agriculture.

For more than 100 years, apiarists have rented bee colonies to farmers to increase yields of melons, orchard fruits and other crops. Pollination service fees for almonds doubled around 2004, when growers began planting more trees, and more densely, to meet increased demand.

In 2016, almond growers accounted for 82 percent of all U.S. expenditures on pollination. Most almond orchards are in California's Central Valley region. "As the crop’s demand for pollination services has outstripped local supply, farmers have paid high fees to bring in colonies from cross-country distances for the February bloom," Ferrier reports. "At 5 percent, the pollination-services share of all farm costs is far higher for almonds than for most other crops (about 1 percent)."
Written by Heather Chapman Posted at 7/10/2018 12:07:00 PM