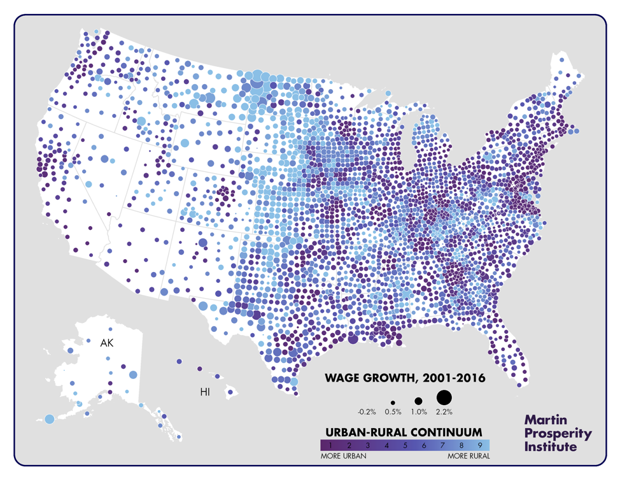 The fourth story in CityLab's excellent series on the myths vs. realities in America's rural-urban divide focuses on wages and salaries. There is "considerable variation" in wages and salaries between urban and rural counties, but within the categories of urban and rural. Some urban counties like New York have a median income of more than $100,000, while others have a median of $20,000. Rural counties display the same kind of range, Richard Florida reports for CityLab.

"Interestingly enough, large rural counties—both those that are adjacent to metro areas and those that aren’t—had wages and salaries that were comparable to counties in small metro areas. And some rural counties had median wages and salaries that were quite high," Florida reports. "Butte County, Idaho, a small rural county adjacent to a metro, had a median salary of nearly $90,000 . . . This can be traced to high levels of employment in the government sector, particularly in the Idaho National Lab. North Slope Borough County, Alaska, a medium-sized rural county that is not adjacent to a metro area, had a median wage and salary of nearly $100,000 ($99,283), largely because of the oil and natural-gas development there."