Trump is net popular only in rural areas and small towns 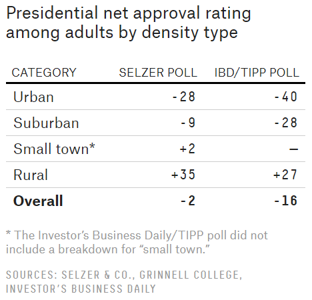 "This is perhaps stating the obvious, but Trump would do well to improve his standing among suburban and urban voters before 2020. Less than 20 percent of the U.S. population lives in rural areas," Rakich and Dhrumil report. "According to the Congressional Density Index from CityLab, a news website covering urban issues, just 70 congressional districts are 'pure rural,' and an additional 114 are a 'rural-suburban mix.'"
Written by Heather Chapman Posted at 12/12/2018 12:47:00 PM