The latest Map the Meal Gap report, by nonprofit organization Feeding America aims to provide a more detailed picture of food insecurity in America with county-level data from 2017.

According to U.S. Department of Agriculture data, about 40 million Americans, including more than 12 million children, faced hunger and food insecurity in 2017. But "national and even state estimates of food insecurity can mask the variation that exists at the local level," the Feeding America report says. Some hunger organizations estimate local need based on poverty rates, but that isn't the best way to measure it, according to the report: "National data reveal that about 59% of people struggling with hunger earn incomes above the federal poverty level and 61% of people living in poor households are food-secure."

Instead, Feeding America gathered four types of community-level data to assess hunger: overall food-insecurity estimates, child food-insecurity estimates, average meal costs and food budget shortfalls. The researchers found that, as expected, poverty, unemployment, and under-employment contribute significantly to hunger. Under-employment exists when a person is working but doesn't have enough hours or sufficient wages to make a living. Hunger is most concentrated in the Black Belt, the Lower Mississippi Valley, Central Appalachia, and Native American reservations.

The Map the Meal Gap report has an interactive map with county-by-county data. Here's a screenshot for Rhea County, Tennessee; for a larger version, click on the image. 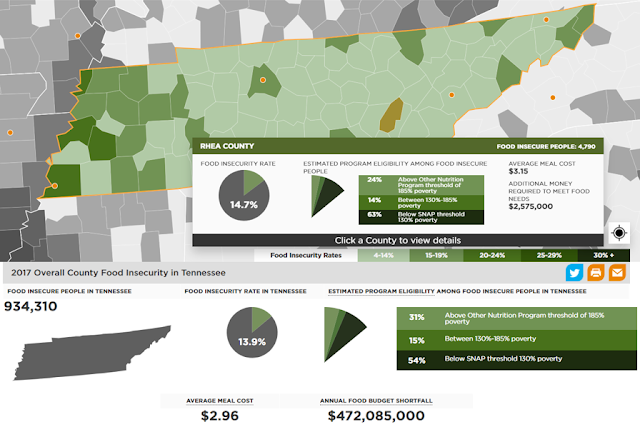