Local news media trusted more than national media, but not as well as most other local institutions; partisanship invades

Local news media enjoy more trust than their national counterparts, but a new study has warning signs for community journalists and their paymasters.

A Gallup Poll funded by the John S. and James L. Knight Foundation shows that "The same forces that have eroded trust in the national media are now beginning to filter down to the local level," John Sands reports for Knight. "That trust is more fragile than previously understood -- and vulnerable to the same perceptions of partisan bias that threaten confidence in the national media."

Six in 10 Americans believe their local news outlets are "accomplishing most of the key tasks of informing communities," Sands writes. "And local journalists are seen as more caring (36 percent), trustworthy (29%) and neutral or unbiased (23%). But local news outlets don’t exist in a vacuum, as this study emphasizes."

Just as with national media, "a person’s political affiliation is a determining factor in how they feel about their local news outlet, with Democrats having more confidence in local than Republicans," Sands notes. "As local news outlets wade into coverage of controversial social and political issues, as is more common on the national level, those levels of trust could also wane."

Sands, who is Knight's director for learning and impact, identifies key points from the poll:
The last two bullet points could be translated into a prescription of relief from the three immediately preceding. The Institute for Rural Journalism and Community Issues, publisher of The Rural Blog, is tackling the drug issue with Covering Substance Abuse and Recovery: A Workshop for Journalists, in Ashland, Ky., on Nov. 15. A discounted registration fee of $50 is good through Friday, Nov. 1; for details and registration, click here. 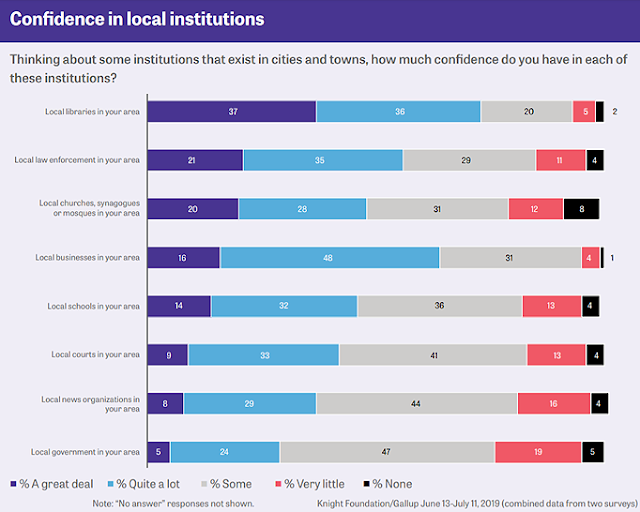