The issues swirling in the battle over a vacant Supreme Court seat “encompass the broader culture war that divides red and blue America, from abortion to marriage equality to health care to the very structure of government,” writes Dan Balz, chief correspondent for The Washington Post. “The battle could easily expand to an even more charged debate over whether the high court speaks for and represents the views of a majority of Americans, or even whether the democratic system of government more broadly has become undemocratic,” through Republican gerrymandering and the Senate’s built-in bias in favor of rural states, at a time when rural voters are more Republican than ever.
Republicans control the Senate, but "their members represent fewer than half the nation’s population," Balz notes. "Republicans in the House have routinely won more seats than their share of the vote, thanks to the makeup of congressional districts." He notes The Economist magazine's cover story of July 2018, "American democracy's built-in bias toward rural Republicans," which spotlighted "the consequences of a nation with an expanding urban-rural split as wide as it is now in the United States." 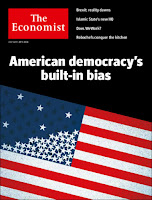 The Economist said, "The electoral system the Founders devised, and which their successors elaborated, gives rural voters more clout than urban ones. When the parties stood for both city and country that bias affected them both. But the Republican Party has become disproportionately rural and the Democratic Party disproportionately urban. That means a red vote is worth more than a blue one. . . . The 13 states where people live closest together have 121 Democratic House members and 73 Republican ones, whereas the rest have 163 Republicans and just 72 Democrats. America has one party built on territory and another built on people. . . . Rancorous political disputes—over guns, abortion and climate change—split so neatly along urban-rural lines that parties and voters increasingly sort themselves into urban-rural tribes. Gerrymandering and party primaries reward extremists, and ensure that, once elected, they seldom need fear for their jobs. The incentives to take extreme positions are very powerful." Nate Silver of FiveThirtyEight has a more detailed examination of "The Senate's Rural Skew."
Balz notes, "Former presidential candidate Pete Buttigieg said in August that if Trump were reelected a second time without winning the popular vote, it could force an examination 'of what’s become of our democratic system.' In recent years, ideas that have been put forth by those who believe it is time for such an examination. They include adding more justices to the high court (as Buttigieg recommended during his presidential campaign) and amending the Constitution to eliminate the electoral college and elect presidents by popular vote. More provocative have been suggestions that Democrats should push to bring D.C. and Puerto Rico into the union to affect the balance of power in the Senate. Up to now, this has been a discussion that animates many on the left, but it’s not one that has gained a wider audience. Nor is it in the current capability of Democrats to effect such changes. But if Republicans exercise their power brazenly in an attempt to install a new justice in the face of a Biden victory in November, who can say where this fight could go?"
Written by Al Cross Posted at 9/21/2020 11:43:00 AM