Some states with large rural populations got off to a fast start getting their residents vaccinated, but recently "have hit a wall," reports Stateline, a service of the Pew Charitable Trusts.

"Those less populous states outhustled bigger ones using innovative distribution schemes such as flying vaccines on small airplanes to remote areas, tapping into existing rural health systems and eschewing the county-by-county model that slowed larger states’ distribution," Elaine Povich writes., noting Alaska and West Virginia. "The plummet is a combination of the unsustainability of early distribution methods and less demand for vaccines among the remaining, largely rural population, experts say."

Jennifer Tolbert, state health reform director for the Kaiser Family Foundation, told Povich, “More recently, what you are coming up against are ideological issues in more conservative states. Vaccines are available, but absent mandates and requirements for people to get vaccinated, if there is hesitation or reluctance in large sectors of the population, the vaccines are going to plateau.”

William Galston, a senior governance-studies fellow at the Brookings Institution, a nonpartisan think tank, "noted that white people without a college degree, who generally make up more of the vaccine-resistant U.S. population, are a higher share of the rural population." He told Povich, “I won’t say demography is destiny, but when you are looking at vaccines, it’s way up there.”
The wall is also political. Several research reports have noted the negative correlation between states' vaccination rates and their percentage of vote for Donald Trump last year. Here's one graph, from The Washington Post: 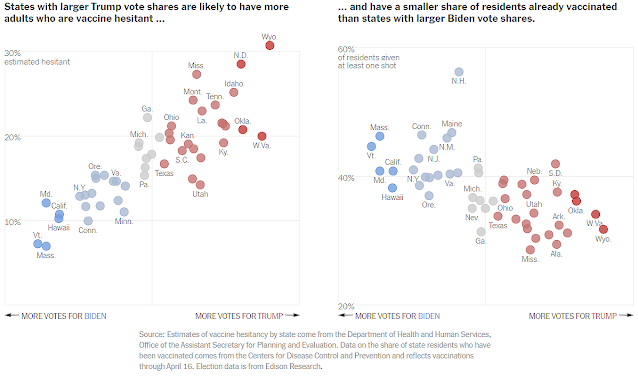