Center of U.S. population is still moving west and south, but not as fast as in recent decades; still in rural Missouri 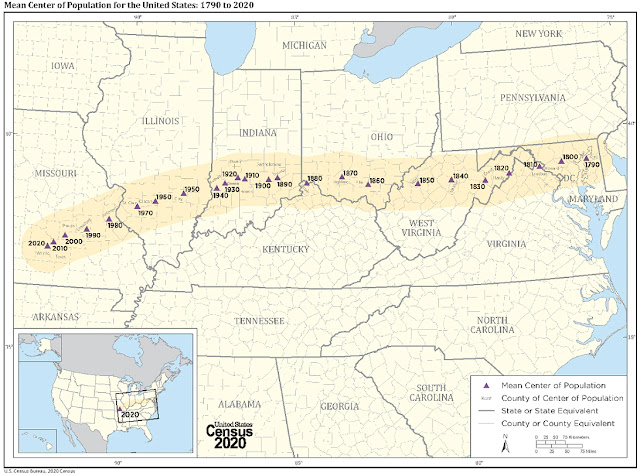 "Westward movement" has been a feature of America since the first permanent settlements by Europeans, and each time a census is taken, the Census Bureau calculates the center of population, which it says is "a point at where an imaginary, flat, weightless and rigid map of the United States would balance perfectly if everyone were of identical weight." With every census, it has been farther west, but in recent decades it has also headed south. In the last decade, it still headed southwest, but didn't go as far.

The bureau says the center of population is at 37.415725 degrees north latitude and 92.346525 degrees west longitude, just southwest of County Road 303 in Wright County, Missouri, on the waters of Beaver Creek (one of the nation's most common stream names). That's about 15 miles northeast of Hartville, population 613 and the county seat.

"Towns in Missouri have been the population centers since 1980," the bureau says. "The largest movements by miles were between 1850 and 1890, when events like the Gold Rush in California and land speculation in Oklahoma helped spread people farther west." Ron Jarmin, the bureau’s acting director, said “The movement of the center of population helps tell the story of this century’s migration South and West. It helps visualize where we live.”

The Census bureau also plots the population centers of states, counties, census blocks and census tracts. Where is your state's center of population? The bureau has tracked it since 1880; look here.