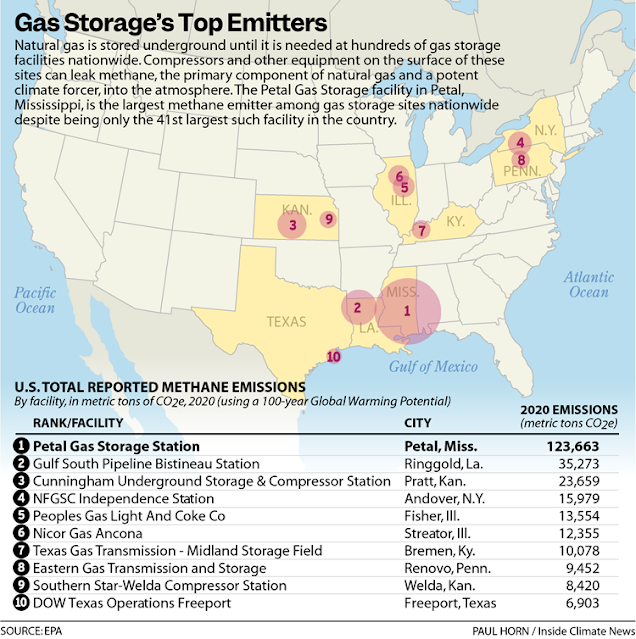 "Infra" is Latin for "under," but "infrastructure" often seems to mean mainly things on the surface: roads, rails, runways, etc. People are aware of pipelines, sewers, etc., but they don't think about them because they don't see them. Most people are probably not aware of one of the largest elements of energy infrastructure: giant, deep underground caverns where natural gas is stored for later use. And most surely don't know that some of those storage fields leak the main component of natural gas: methane, a potent greenhouse gas.

Phil McKenna of Inside Climate News tells us about that with the help of Alex Rozier of Mississippi Today, and their object example is the Petal Gas Storage Field in southeast Mississippi, which "emits the greenhouse gas equivalent of 87,000 automobiles—more than any other gas storage facility in the United States." Created by watering a salt dome and pumping out the brine in 1951, it is in the first underground salt dome carved out for gas storage, and it is the leakiest. It's only the 41st largest storage field, but emits three and a half times as much methane as the next biggest leaker, also owned by Gulf South Pipeline and parent firm Boardwalk Pipeline Partners.

"Gulf South and Boardwalk have begun to curb emissions at the Petal facility, cutting them in 2020 by nearly 50 percent of what they were in 2019, a year when Petal’s emissions were more than five times larger than any other underground gas storage facility in the country. Boardwalk executives said they slashed emissions again, this time by 54 percent, in 2021," McKenna and Rozier report. "EPA has not yet verified Petal’s 2021 emissions. . . . The Petal facility’s emissions do not violate any state or federal laws, but they call into question the ability of the oil and gas industry to voluntarily curb its own climate pollution. Emissions from the transmission and storage sector account for approximately 25 percent of the total methane emissions from the natural-gas industry. A draft rule proposed by the EPA last November includes what would be the first mandatory methane emission reductions for existing gas transmission and storage facilities."

The Federal Energy Regulatory Commission says methane is not toxic, but health experts say it is often accompanied by volatile organic compounds and toxic gases. Petal Alderman Gerald Steele, whose ward includes the gas field, "expressed surprise that the Petal plant’s emissions were the highest from such facilities in the nation," Rozier and McKenna report. "He said that the company is an important financial contributor to the city through its employment and tax contributions." The reporters say the leaks come from faulty equipment, not the geology of the infrastructure, and their story has useful diagrams that explain.
Written by Al Cross Posted at 6/23/2022 10:54:00 AM