Crackdown on illegal aliens could disrupt this year's harvest season 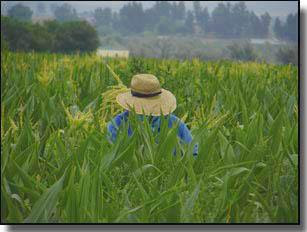 Since the White House vowed to curtail illegal immigration, farmers have been worrying about what could happen when the administration makes good on that promise, writes Sean Ellis of the Idaho Farm Bureau Federation, which provided the photo of a worker in a cornfield.

That crackdown could arrive in time for this harvest, which could mean an inconvenience or worse for farms that depend on immigrant labor. Ellis adds that law enforcement will be focusing on those businesses that employ illegal aliens. If that happens, then "the food chain could start falling apart," one California producer told Ellis.

According to Mark Duffin, executive director of the Idaho Sugarbeet Growers Association, the effect of this heightened enforcement would not be limited to farms. “I think clear across the whole economy, it can create some serious problems; it’s not just agriculture,” he told Ellis. “It will be felt across the country.”

The first sign of trouble will be the arrival of a "no-match" letter from the Social Security Administration, which notifies a business about a problem with employees' Social Security Numbers. The business can then either fix the problem with the SSA or fire the employees. If the employee remains on the job and is found to be illegal, the business could "face fines or criminal sanctions," Ellis writes. Since the start of the 2007 fiscal year, there have been 742 criminal arrests of employers.

With no guest-worker plan in place, many farmers say the enforcement could leave them shorthanded. “If we go cold turkey, it could create some real disruptions,” Duffin told Ellis. “We obviously do need the workers here. But we need to know who they are and have them here legally and the system isn’t working now.” (Read more) To view the Department of Homeland Security's information on immigration, go here.
Written by Al Cross Posted at 9/18/2007 11:07:00 AM