UPDATE 12/23: The Montana Land Board decided Dec. 22 to put the tracts up for bid and "said it will demand top dollar for the coal," Matt Gouras of The Associated Press reports. "Observers said the state may be asking too much." 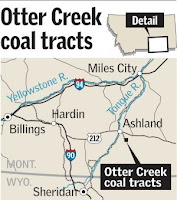 Montana lawmakers are expected to vote on a proposal to open the state's substantial coal reserves in the nation's largest coal basin even as coal prices drop amid heavy supply. The state's 616 million tons of recoverable reserves in the Otter Creek region are interspersed among 731 million tons of private reserves which Arch Coal Inc. announced last week it had acquired leases for, Mark Peters of The Wall Street Journal reports. (Gazette graphic by Victor Ady)

Montana coal production has been overshadowed by neighboring Wyoming, which shares the Powder River Basin. Company officials and state lawmakers say declining production at existing mines elsewhere in the country, new power-plant construction, technological advances at existing plants and possible exports to Asia should boost demand for Montana coal in the coming years. The development isn't without its obstacles, Peters reports. Montana coal generally has higher sulfur content, limiting the plants that can burn it, and an estimated 90 miles of new railroad tracks are needed to connect the Otter Creek region in southeast Montana with the existing lines. (Read more)

Today's vote will come from the state Land Board, which will decide whether to go forward on accepting bids on the state coal or delay its decision, while allowing more public comment. Even if the state decides to move ahead with development, it would be years before any mining or development occurred, Dennison reports. Six environmental and conservation groups sent a letter to the Land Board this week asking for an additional 60 days to examine and comment on the lease documents. (Read more)
Written by Jon Hale Posted at 11/16/2009 11:49:00 AM