Obesity and diabetes are growing across the country, but in the first county-by-county national breakdown, the U.S. Centers for Disease Control and Prevention reveals the rates are highest in heavily white Appalachia and the Black Belt and other heavily African-American areas of the Southeast. Edward Gregg, chief of epidemiology and statistics in CDC's division of diabetes translation and the study's lead author, described obesity and diabetes as "basically the two conditions of greatest concern for U.S. adults right now."

The two conditions are related; diabetes is one complication of obesity. In Appalachia, 81 percent of counties have high rates of diabetes and obesity, and the study shows three-quarters of counties in the Southeast have similar rates, with the highest concentrated in counties with high percentages of African Americans. ("Black Belt" was originally a geologic term for a soil section of Mississippi, Alabama and Georgia, but now also describes the crescent of majority African Amercian counties that reaches as far as Virginia.) Some counties with Indian reservations also have high rates.

"We think these increases in obesity and diabetes partially reflect the cultural shifts that are affecting all of us," Gregg told HealthDay News, "but we see them most in regions where there is more poverty and where educational levels are lower." (Read more) CDC produced county-by-county breakdowns of both diabetes and obesity levels in each state, and national maps of diabetes and obesity rates. Here's the national diabetes map: 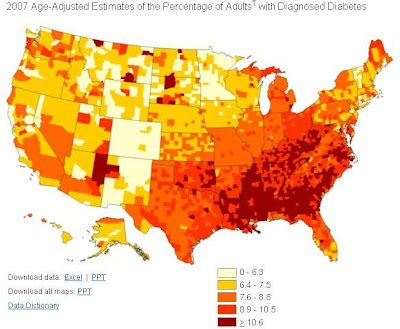