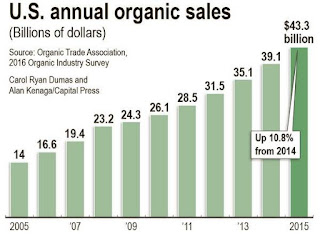 Organic agriculture boosts local economies, says a study by Penn State for the Organic Trade Association. The study looked at "225 counties considered organic hotspots—counties with high levels of organic agricultural activity that have neighboring counties with high organic activity—and then looks at how these organic hotspots impact key county-level economic indicators," OTA reports. Research found that being in an organic hotspot increased median income household income by more than $2,000 and lowers a county's poverty rate by 1.35 percent.

U.S. organic sales increased by 11 percent in 2015, Carol Ryan Dumas reports for the Western agricultural news site Capital Press. "Total organic sales in 2015 marked the fourth-consecutive year of double-digit growth, adding $4.2 billion in sales over 2014. Those sales represent a 209 percent growth since 2005, when sales totaled $14 billion." Last year "total sales of organic food and non-food products reached $43.3 billion, with organic food sales claiming about 92 percent of all receipts at $39.7 billion, according to the Organic Trade Association." Organic sales accounted for nearly 5 percent of all food sold in the U.S.
Written by Tim Mandell Posted at 5/25/2016 09:37:00 AM