Georgia, withering from drought, wants to correct a 190-year-old mistake and move its border with Tennessee a mile north so it can freely draw water from Nickajack Lake. A Georgia legislative committee approved a bill this week calling for creation of a boundary line commission, but officials in Tennessee scoffed at the idea, reports the Chattanooga Times Free Press: "They have criticized the effort as a veiled attempt by a thirsty Atlanta, unwilling to control reckless sprawl, to get access to the bountiful Tennessee River," which the Tennessee Valley Authority impounded to create the lake in the 1930s.

Georgia state Sen. David Shafer, R-Duluth, "said he believes resolution of the border issue will open the way to discussions about water sharing," the Times Free Press said in a staff report this week. Last fall, Tennessee Gov. Phil Bredesen "said he has no interest in seeing Tennessee River water diverted to relieve drought-parched metro Atlanta and northern Florida," wrote TFP Nashville reporter Andy Sher. "I would have a real problem ... with a wholesale transfer of water out of the Tennessee watershed into Florida," Bredesen told him. "I just think it's one of the very important natural resources that we have in Tennessee, and (we) should be very, very cautious about allowing it to be degraded in any way." (Read more)

Atlanta's situation became more dire this month, with a federal appeals-court decision "curtailing Georgia's access to Lake Lanier – metro Atlanta's primary water source — in the future," wrote Dan Chapman of the Atlanta Journal-Constitution. The suit was filed by interests downstream on the Chattahoochee River, as far as Florida.

The border between Georgia and Tennessee is supposed to be 35 degrees north latitude, the horizontal gray line on this Encarta map, centered on the aptly named (from Georgia's viewpoint) community of New Hope, Tenn. The shallows of Nickajack Lake are tantalizingly close to the northern border of Georgia -- about 150 feet, by our reckoning of a satellite photo. A major water intake would probably require deeper water, but no more than 1,000 feet north of the border. The Journal- 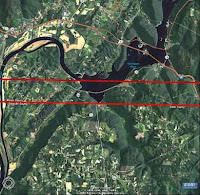 Constitution used this satellite photo and red lines to show its somewhat different concept of the current and proposed border.

Seems to us there are other ways to solve the problem than moving a long-established border. In another story, Chapman said a 2004 TVA study found "Metro Atlanta could receive 264 million gallons a day — triple the average amount used daily by the city of Atlanta last December — with minimal impact on the river."

C. Bart Crattie, a surveyor who lives on the Georgia part of Lookout Mountain, told Pam Sohn of the Times Free Press that most of Tennessee's borders were incorrectly drawn to the state's advantage. “Tennessee made out like a bandit on all of its surveys,” he said. “On the Kentucky line, it’s off in some places by as much as 9 miles in Tennessee’s favor.” (Read more) The two states settled that error in the 1830s by allowing Kentucky to make land grants in the slice of Tennessee that should have been in Kentucky.