Evangelical environmentalists in Tennessee are pushing for a bill that would limit mountaintop strip mining of coal in the state, which they fear is about to increase. And they might have a better chance of getting something passed on the subject than elsewhere; the bill has bipartisan support and is linked to the state's tourism industry.

Because Tennessee turned over strip-mine regulation to the federal government many years ago, mountaintops mined for coal in the state must be restored to their approximate original contour. That means Tennessee does not have typical mountaintop-removal mines, like those that put their excess dirt and rock into surrounding hollows in Kentucky, Virginia and West Virginia. But the "cross-ridge mining" that is allowed in Tennessee ruins hydrology and scenic vistas, opponents say. They say only 327 Tennesseans work in coal mining, while the major mining area is in the watershed of the Big South Fork National River and Recreation Area. 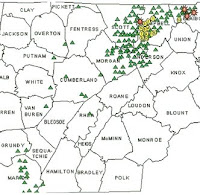 The bill pushed by the Lindquist-Environmental Appalachian Fellowship would "would prohibit surface mining above 2,000 feet or within 100 feet of a stream or other waterway," Theo Emery writes in The Tennessean of Nashville. "It would prevent any additional permits for surface coal mining from being issued until after the federal government does a new environmental review of the effects of surface mining." A map from the LEAF Web site shows current mountaintop mines in red, proposed mines in yellow and potential sites in green.

Attorney General Bob Cooper said last week that only the federal government can regulate mining, but LEAF says in its latest Web alert, "He's mistaken. Our bill regulates water issues related to mining, and even when regulating mining, the Federal government is clear that our laws can be more restrictive than federal laws as long as they don't conflict. We are blessed to have some impressive environmental attorneys helping us out on this for free. We think we can bounce over this with good law and discussions. It does, however, make for a bit more work."

Emery writes, "The church group began as a living memorial to a deceased congregation member, Kathy Lindquist. She was passionate about stopping mountaintop mining, and wrote about the issue in her final newsletter column before she died of cancer in 2005." LEAF says the bill is due up in a House subcommittee March 19 and a Senate committee March 26. Coal interests appeared before the committee last week. "Daniel A. Roling, president of Knoxville-based National Coal Corp., said the ban would cost his company $700 million and cripple its operations," Emery reports. (Read more)

Rick Held reports in Metro Pulse, a Knoxville weekly, that more mountaintop mining is on the horizon in Tennessee, with permits pending, and "The Tennessee Valley Authority’s huge investment in smokestack scrubbers for their coal-burning power plants has created an even greater incentive to extract its own coal reserves under the ridges of its vast holdings in the Royal Blue tract," home of a state wildlife management area in Scott and Campbell counties. (Read more)
Written by Al Cross Posted at 3/16/2008 09:32:00 PM