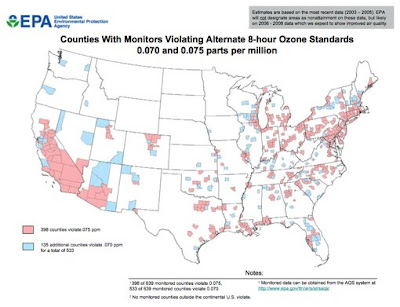 The Environmental Protection Agency recently revised its standards for acceptable levels of ozone, and according to those standards, 45 non-metro counties possess health-hazardous levels, reports Julie Ardery of the Daily Yonder. In the EPA map above, the counties in pink exceed the new standard of .075 parts per million; those in blue were between .070 and .075. The old standard was 0.8.

EPA and the American Lung Association wanted to move the standard even lower, but some officials, such as Sen. Jim Inhofe, R-Okla., said the new standard would hurt his state since areas could lose federal funds due to high pollution levels. Four of the nine non-compliant Oklahoma counties were rural, Ardery notes.

"Polluted country air poses hazards to people, animals, and even crops," she writes. "Ozone (O3) is produced when sunlight interacts with emissions from cars and trucks, factories, and power-plants. It causes asthma, damages the lungs of animals (human and otherwise), and stunts the growth of plants." Ardery cites a recent study from the Massachusetts Institute of Technology that says if current ozone trends continue, "by 2100 the global value of crop production will fall by 10 to 12 percent." (Read more)
Written by Tim Wiseman Posted at 3/20/2008 05:18:00 PM