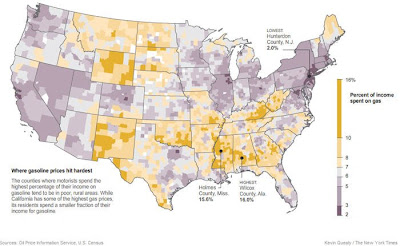 As a percentage of income, high gasoline prices are having the hardest impact in rural areas of the South, New Mexico, Montana, Wyoming and the Dakotas, reports Clifford Krauss of The New York Times, reporting on a survey by Oil Price Information Service. "People are giving up meat so they can buy fuel," Krauss writes. "Gasoline theft is rising. And drivers are running out of gas more often, leaving their cars by the side of the road until they can scrape together gas money."

Americans spend about 4 percent of their take-home income on motor fuels, but "in some counties in the Mississippi Delta, that figure has surpassed 13 percent," Krauss reports. "The survey showed that of the 13 counties where people spent 13 percent or more of their family income on gasoline, 5 were located in Mississippi, 4 were in Alabama, 3 were in Kentucky and 1 was in West Virginia. (Click on Times map above for county-by-county comparisons of gas prices, median income and their intersection.)

Reporting from Holmes County, Miss., Krauss contrasts the Times' home base with the rest of the country: "With the exception of rural Maine, the Northeast appears least affected by gasoline prices because people there make more money and drive shorter distances, or they take a bus or train to work," Krauss writes. "But across Mississippi and the rural South, little public transit is available and people have no choice but to drive to work. Since jobs are scarce, commutes are frequently 20 miles or more. Many of the vehicles on the roads here are old rundown trucks, some getting 10 or fewer miles to the gallon."

The long-term picture is not good. "Sociologists and economists who study rural poverty say the gasoline crisis in the rural South, if it persists, could accelerate population loss and decrease the tax base in some areas as more people move closer to urban manufacturing jobs," Krauss reports. "They warn that the high cost of driving makes low-wage labor even less attractive to workers, especially those who also have to pay for child care and can live off welfare and food stamps." (Read more)

The data make localizing this story easy. Here's an example from the Lexington Herald-Leader.