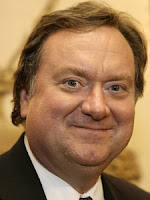 “This is a blow to America,” Peggy Noonan said today about the devastating death of Tim Russert. How many journalists, having died suddenly in the prime of life, would prompt a former speechwriter for a Republican president to say something like that? Very few, if any. I am sure many Americans feel they have lost, if not a friend, an ally – someone who served their interests – because they knew Tim was interested in getting the facts they needed to participate effectively in self-government, perhaps most prominently as an interviewer who asked those who seek our votes the right questions, and in the right way. “He always asked the question we hoped he wouldn’t,” Sen. Mitch McConnell said. (Associated Press photo)

The end of anyone’s life should teach lessons. Tim Russert taught men how to be sons and fathers, and he was a father figure to his younger NBC colleagues, as they have testified today. For journalists, he was a role model for the fundamental function of our business: making democracy work. May we all try to remember that example, and follow it.
Written by Al Cross Posted at 6/13/2008 06:00:00 PM