Las Vegas to get more water from rural Nevada

Nevada's state water engineer approved the pumping of 6 billion gallons of groundwater a year from three rural Nevada valleys to Las Vegas Wednesday, Brendan Riley reports for The Associated Press. "The ruling by state Engineer Tracy Taylor follows a hearing that ended in February with the Southern Nevada Water Authority saying it's entitled to the water from Delamar, Dry Lake and Cave Valleys and opponents warning that the pumping could have a catastrophic impact," Riley writes.

The authority originally sought 11 billion gallons per year but is "very pleased" with the ruling, said Scott Huntley, an authority spokesman. "In his ruling, Taylor retained the authority to halt any pumping if there are impacts to existing water rights or conflicts with existing domestic wells. He said if the pumping threatens to prove detrimental to the public interest or is found not to be environmentally sound, he will also stop the pumping," Mary Manning and Cy Ryan write for the Las Vegas Sun. Taylor also wants more biological and hydrlogic studies conducted before any water is pumped.

Casino executives, developers, union representatives and others who cite water 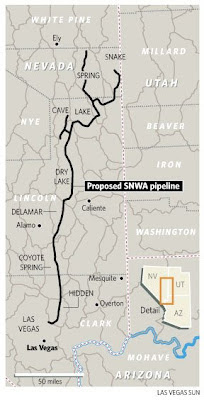 -conservation efforts in the Las Vegas area support the project and warn that without enough water an economic downturn will emerge, affecting the entire state. Ranchers, farmers, local irrigation companies, the Great Basin Water Network, the Sierra Club, Nevada's Cattlemen's Association and White Pine County, which boarders Lincoln County, oppose the project. Launce Rake, spokesman for the Progressive Leadership Alliance, another group that opposes the water shift, called the decision a "mixed bag" and said his organization does not trust the water authority. "These valleys are in extreme drought and need more protection for wildlife and to sustain their communities," he said.

Nevada, the nation's most arid state, continues to be affected by an eight-year drought that continues on the Colorado River and has reduced Lake Mead's level more than 100 feet. The SNWA plans to begin rural groundwater delivery to Las Vegas by 2015. The valleys, which are located between 75 and 125 miles from Las Vegas, "will be the first tapped for the agency's massive pipeline project," Riley reports. "(SNWA's) eventual goal is to import enough water to serve more than 230,000 homes, in addition to about 4000,000 households already getting its water. Cost of its 200-mile pipeline project has been estimated at anywhere from $2 billion to $3.5 billion." (Las Vegas Sun map) Click here to read the Rural Blog's initial story on this from June 12, 2007.
Written by Jason Martin Posted at 7/10/2008 04:17:00 PM