Take a number, take a ride: A road tells stories 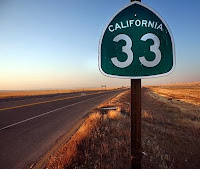 Most numbered highways have a certain artifice; they are stretches of town-to-town roads linked together by politicians and traffic engineers to help motorists navigate rural America. But many of them also have character, the best known being U.S. Route 66 (which was never much artifice and is now mostly artifact). Some evocative roads never break the boundary of a state, but trace its story. Such is California 33, as described by Peter H. King of the Los Angeles Times:

"To travel this two-lane from top to bottom -- a 300-mile drive that begins just below the San Francisco Bay delta, passes through the San Joaquin Valley's west side, crosses steep coastal mountains and ends at Ventura, where Highway 33 disappears into the 101 -- is to tour what might be called the real California. Through a bug-splattered windshield, it's all there to see: Improbably far-flung subdivisions, their outward march stalled only by the mortgage mess; rolling croplands crisscrossed by irrigation canals; a young patriot's grave, the four flags at his tombstone fluttering in a hot valley wind; a hulking new federal prison, rising from cantaloupe fields; West Hills oil rigs, pumping furiously in a new boom; panoramic views of unspoiled high country; and, finally, the Pacific at sunset, 5,000 feet below. ... It is a good road for someone seeking to reacquaint himself with a vexing old friend: California. Sometimes, the best way to make sense of this state is simply to get out into it, to take a look around and refresh the eyes. And, here and there, to make some stops along the way."

The stops provide several vingettes, told by a fine observer and storyteller. Near the end of his sojourn, in a place you have ever heard of, King begins to climb the Coast Range and writes of "a stunning landscape and a reminder of California's enduring capacity to surprise: No matter how much of it you believe you've seen, there's always more." For a photo gallery, click here. (Times map by Lucia Parker; sources: ESRI, TeleAtlas. Times photo by Michael Robinson Chavez.)
Written by Al Cross Posted at 7/07/2008 09:20:00 PM