President Bush recently signed a law adding 10 counties in Kentucky, Ohio, Tennessee and Virginia to the region served by the Appalachian Regional Commission, allowing them to share in the $87 million in federal money the commission offers annually "to pay for economic improvements," writes Roger Alford of The Associated Press bureau in Frankfort, Ky. Alford once had the AP bureau in Pikeville, Ky., in the heart of Central Appalachia, where the expansion of official Appalachia isn't seen favorably.

"Dee Davis, head of the Kentucky-based advocacy group Center for Rural Strategies, said the ailing national economy has spread financial misery beyond Appalachia, and political leaders are looking for help from the ARC," Alford writes, noting that has been par for the course since Congress created the agency in 1965. These are not the first counties added. Davis observes: "Given the current state of affairs, they may want to stretch Appalachia all the way to Chicago."

Alford contrasts poverty rates in a Kentucky county in the center of Appalachia and one of those being added: "Annual jobless rates in Harlan County ranged from 13 percent in 1997 to 9.1 percent last year. In Nicholas County the range was 4.4 percent to 6.4 percent for the same periods." Nicholas lies partly in the Inner Bluegrass region and has some horse farms, but also has suffered from closing of a big textile plant. (Read more) 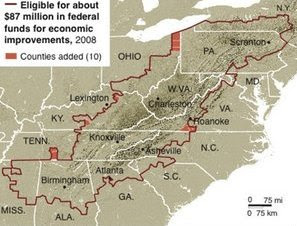 Other Kentucky counties added were Robertson, a tiny, more rugged county that borders Nicholas, and Metcalfe, which borders three longstanding ARC counties in Southern Kentucky's hilly Eastern Pennyroyal region (called the Highland Rim in Tennessee). Other counties added were Ashtabula, Mahoning and Trumbull in northest Ohio, Henry and Patrick in the Virginia Piedmont, and Lawrence and Lewis in Tennessee. (AP map; Atlanta and Roanoke are not in the region)
Written by Jen Green Posted at 10/20/2008 09:36:00 AM